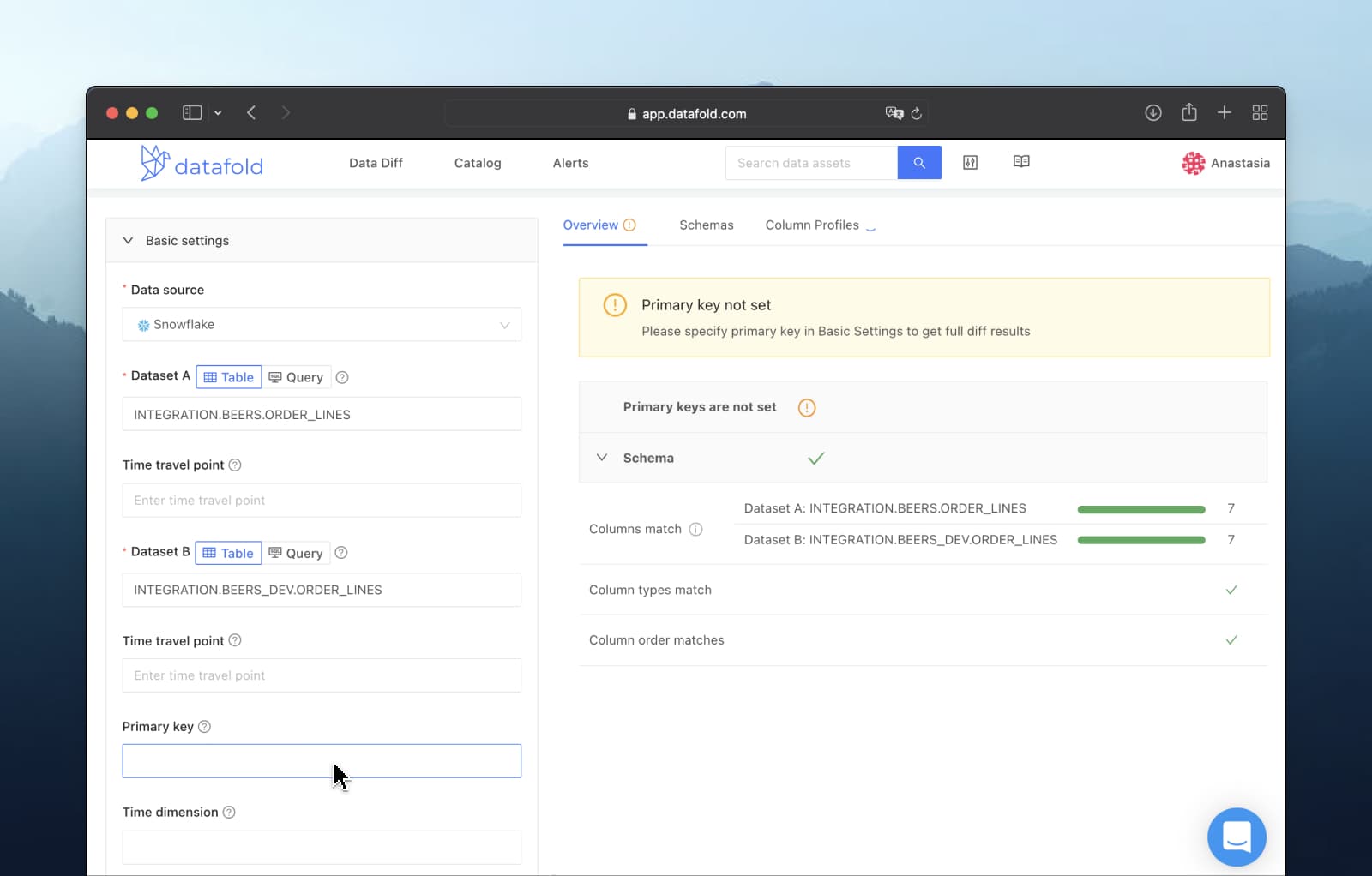 Data Diff now also compares sums and averages for numerical columns which can be helpful for analyzing changes in distributions:

When browsing value-level diffs, overflowing values can be explored and compared by hovering over them. The long values can now be copied to clipboard for further analysis.

A new setting for CI integrations allows users to selectively ignore files modified in a PR and skip running Datafold for irrelevant changes. Files can be excluded, re-included, and re-excluded again, thus allowing complex patterns for the cases like “only run datadiffs if any dbt files have changed, except for the .txt and .md files in that folder”. 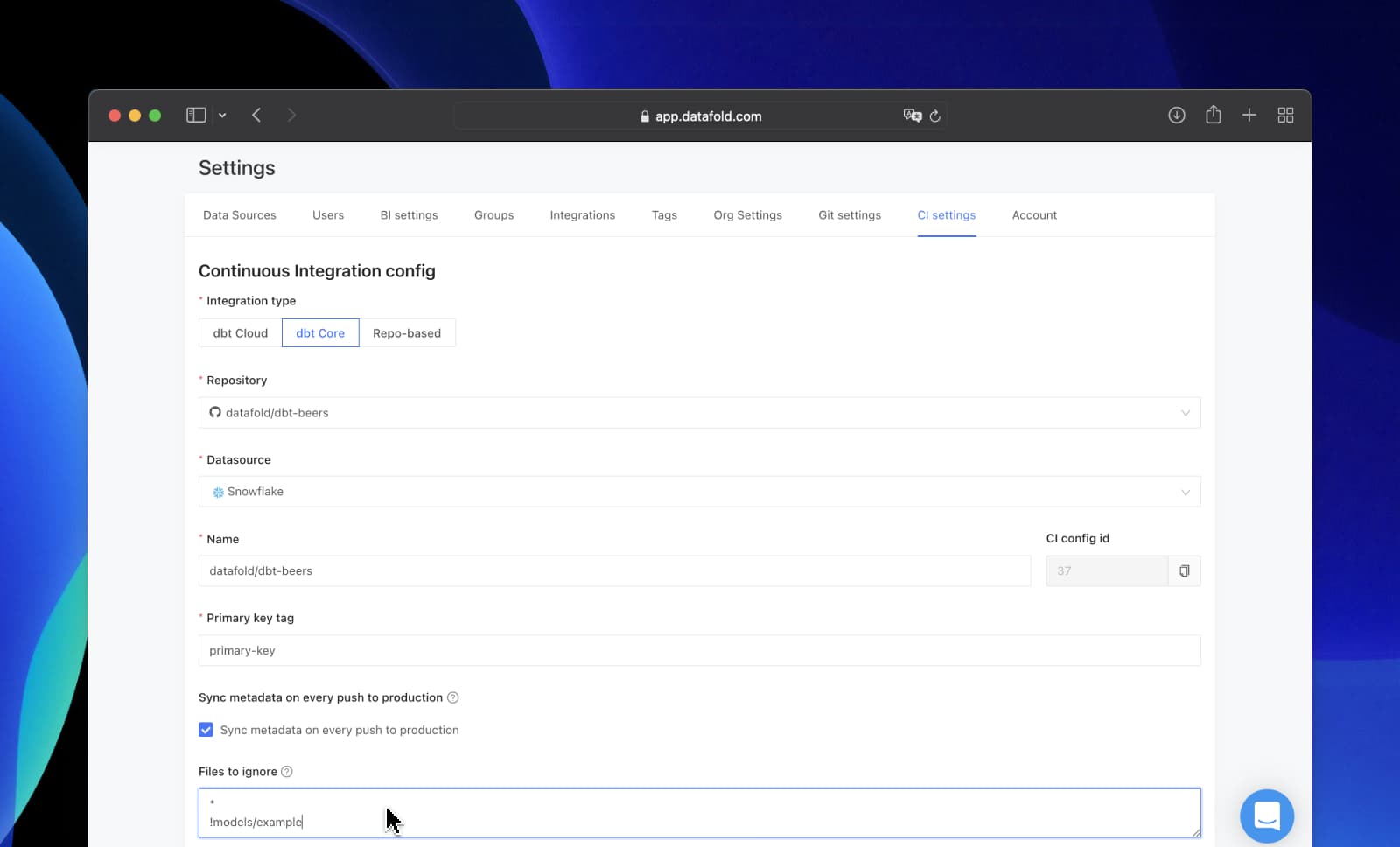 You can see SQL query that was used to create/update a table or refresh a BI report in both Datafold Catalog or Lineage views:

BI reports in Lineage can now be filtered by popularity and freshness: 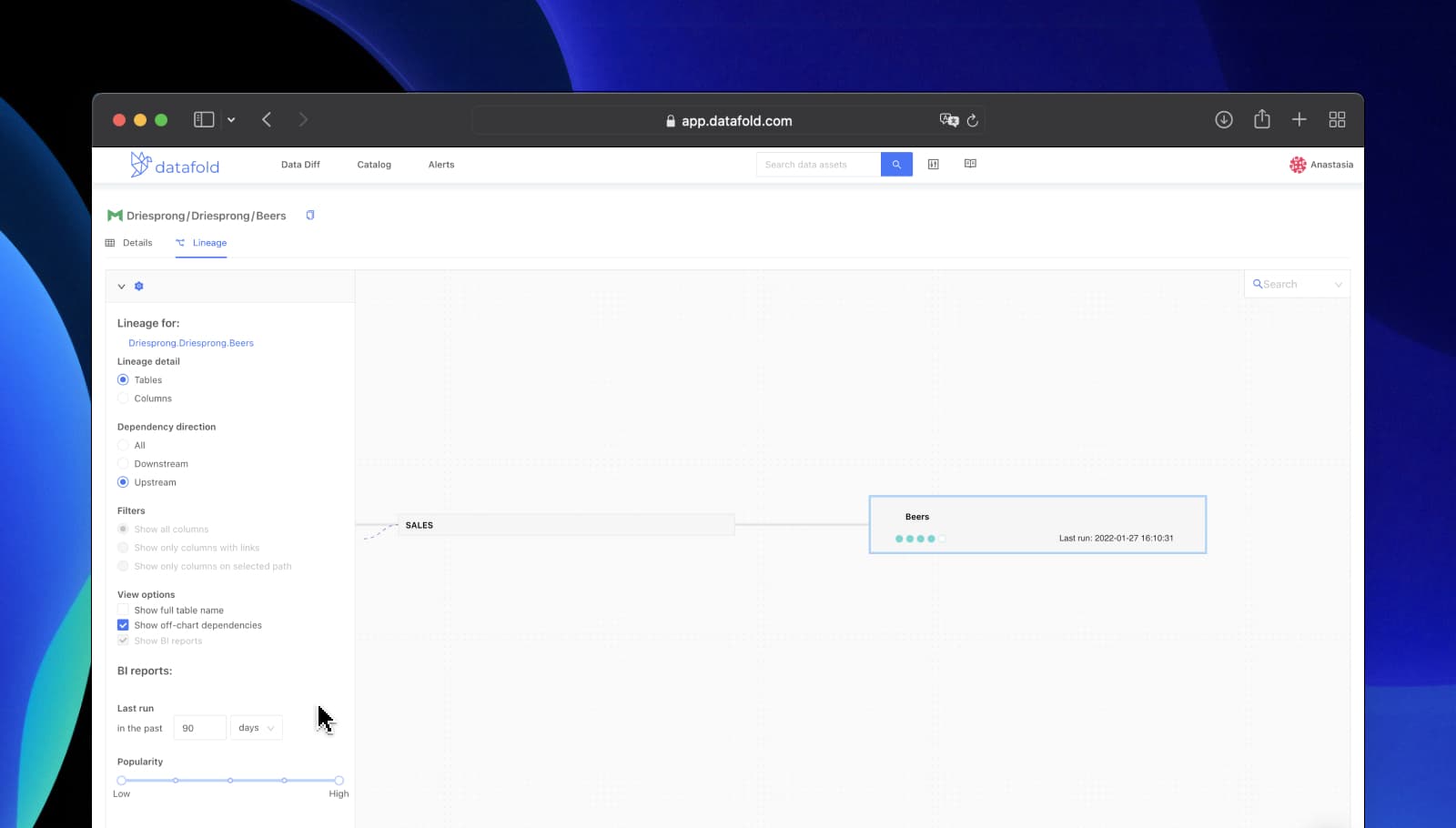 You can see a preview screenshot for any Mode report on the Datafold Lineage graph: 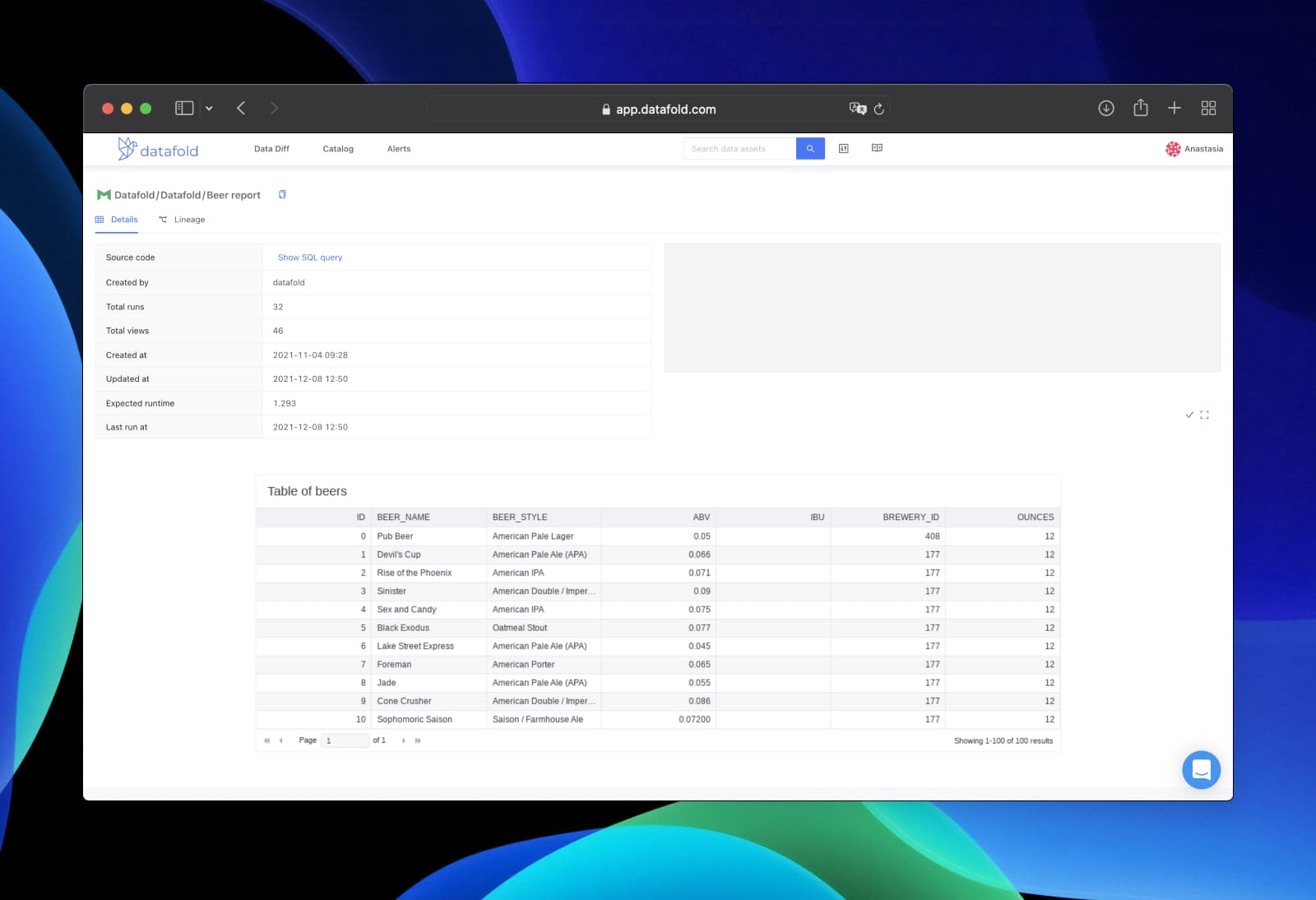 Adding Slack channel destinations is easier with the new Slack App. Users can subscribe to alerts and get mentioned in the designated channels allowing for more targeted alerting and collaborative incident resolution. Documentation is available here. 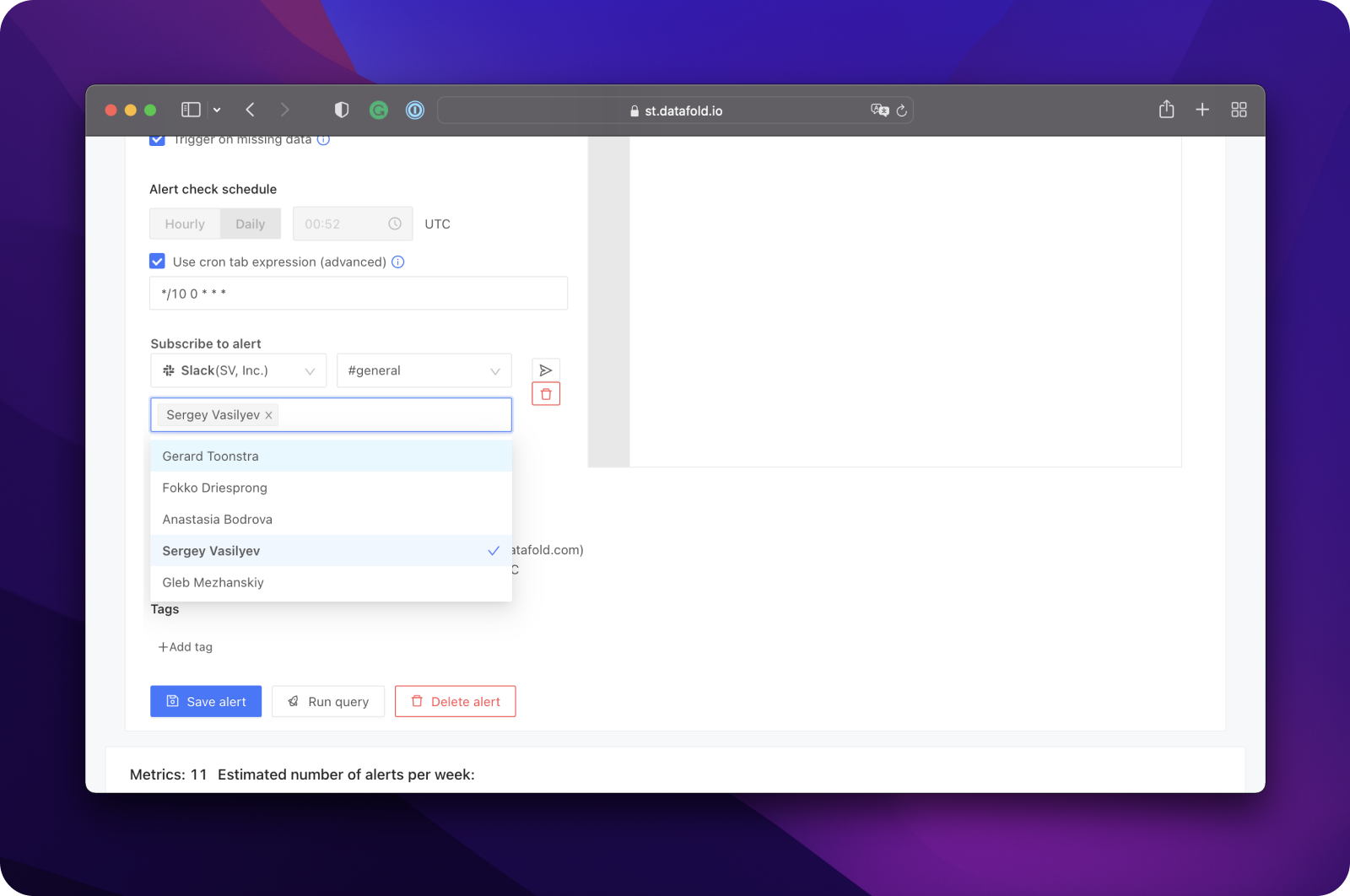 Single sign-on through Okta is now available for Datafold Cloud. 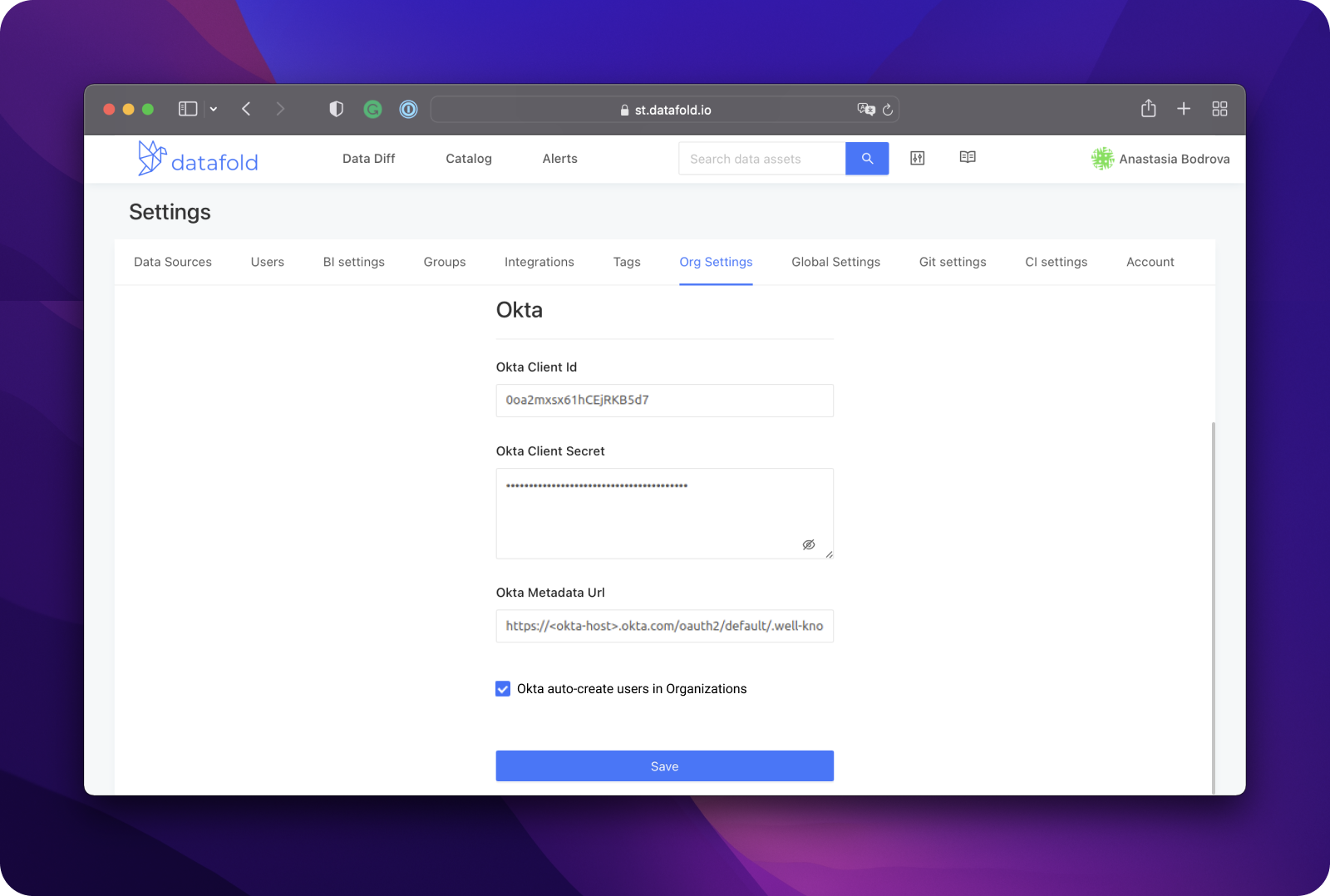 Mode reports are now discoverable through Datafold Catalog and appear in Lineage which enables tracing data flows on a field level all the way to Mode reports and dashboards. Let us know if you would like to enable it for your account. 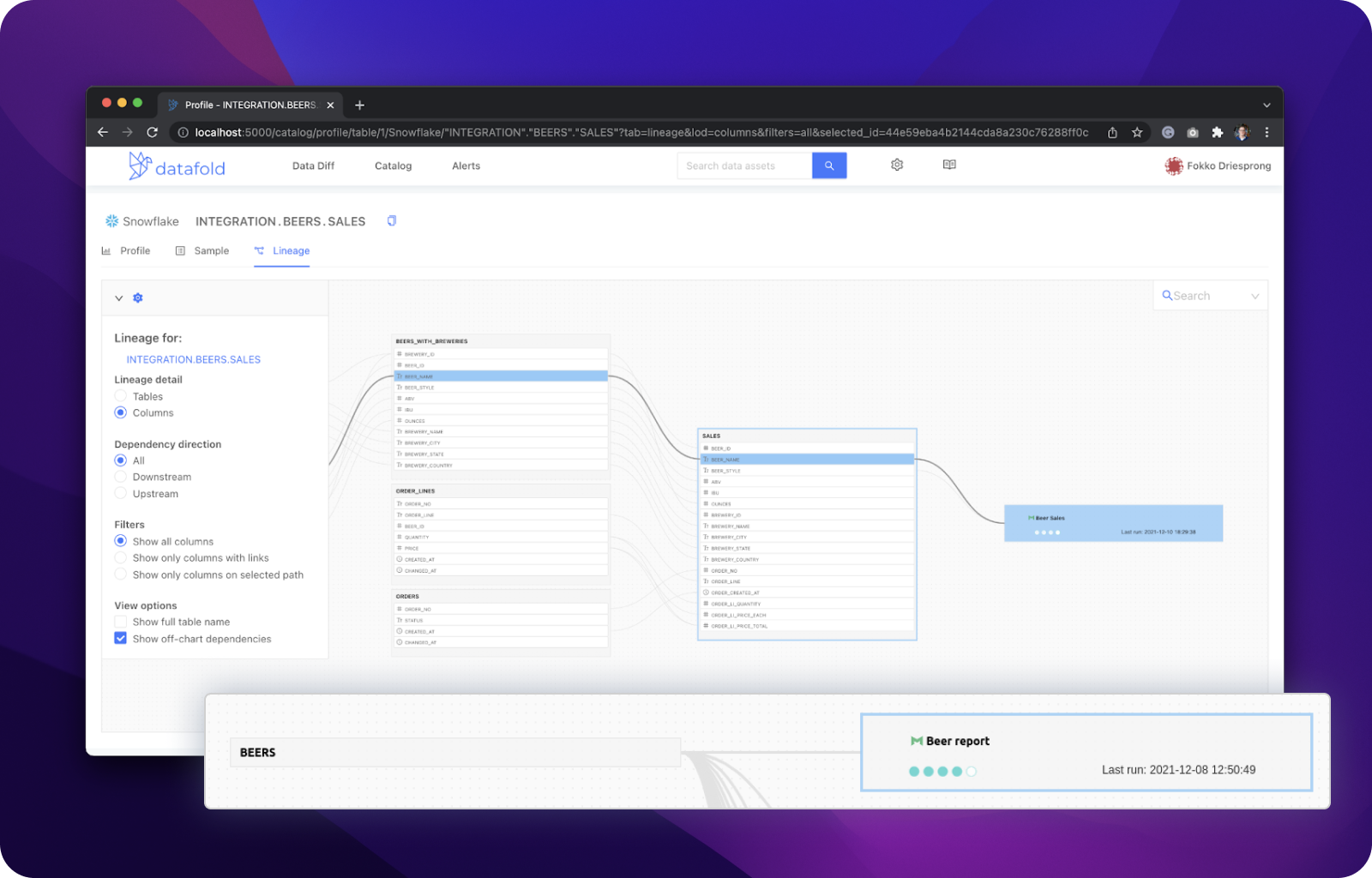 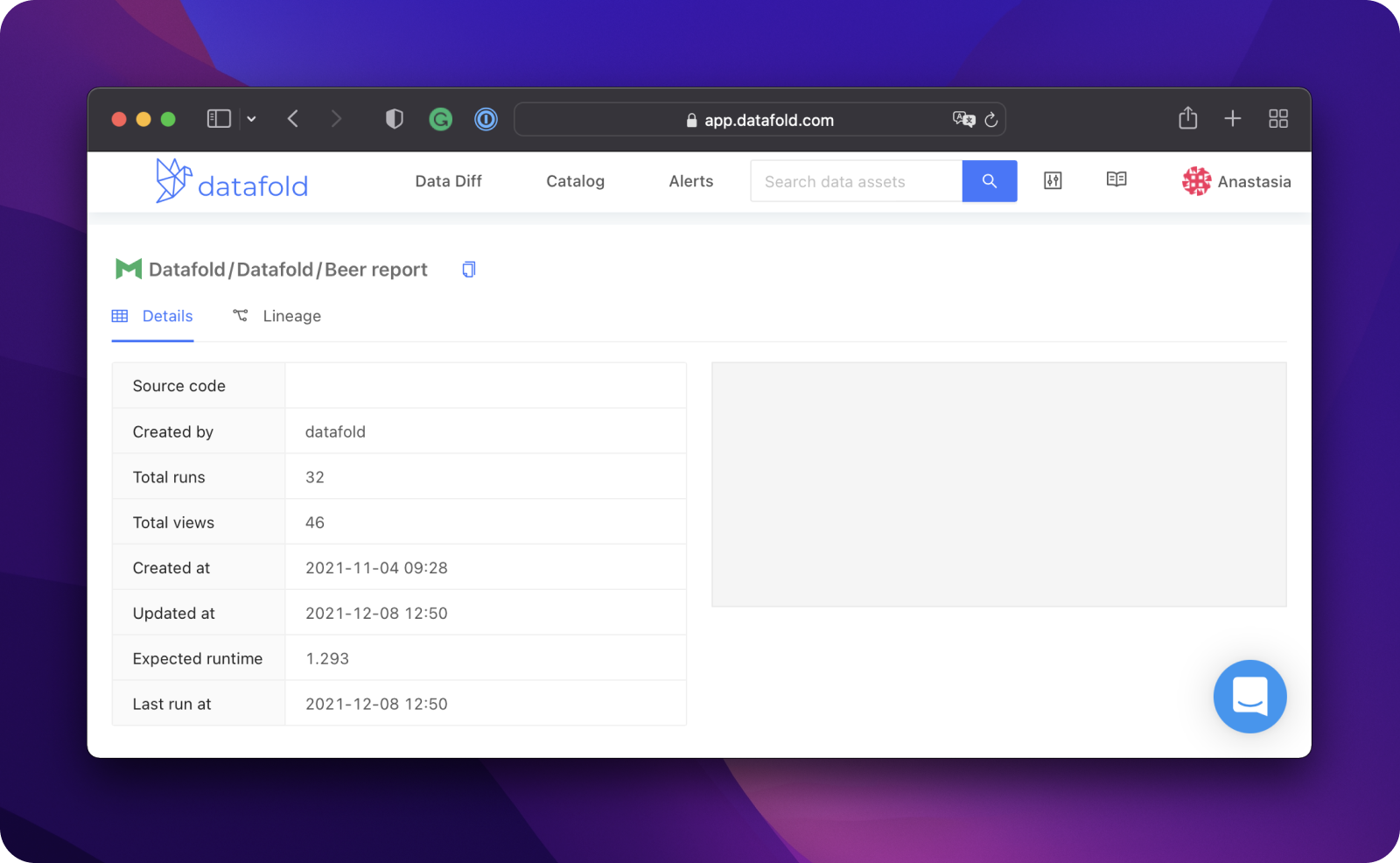 When comparing tables (for example, Staging and Prod versions of your dbt model), Data Diff provides a sample of divergent values for every column that doesn’t fully match between tables. Previously Diff would select ~15 rows for every column that had differences. If there were just a few such columns, the overall sample size could be quite small. The algorithm now selects ~1,000 rows regardless of the number of columns that are different. 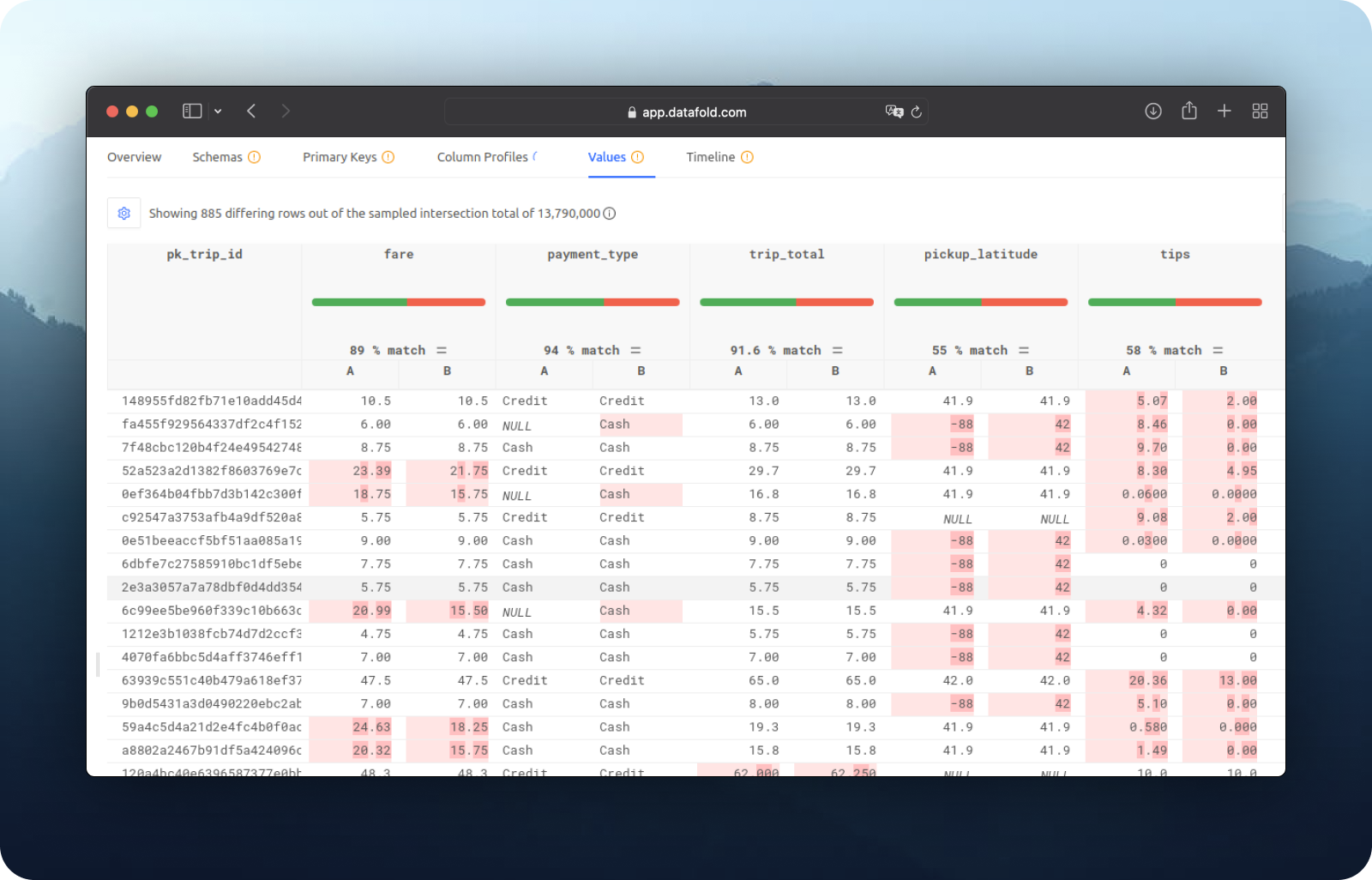 Mode is now available as an integration in Datafold in alpha testing mode. Once enabled, Datafold will index all reports in your Mode account to make them available in the Datafold Catalog search and Lineage.

You can now discover relevant Mode reports alongside datasets in the same search experience. It’s also possible to filter Mode reports based on popularity and freshness.

You can trace field-level data lineage to Mode reports in the Datafold Lineage view to see which tables and columns feed what report, making it easy to perform refactorings and troubleshoot issues: 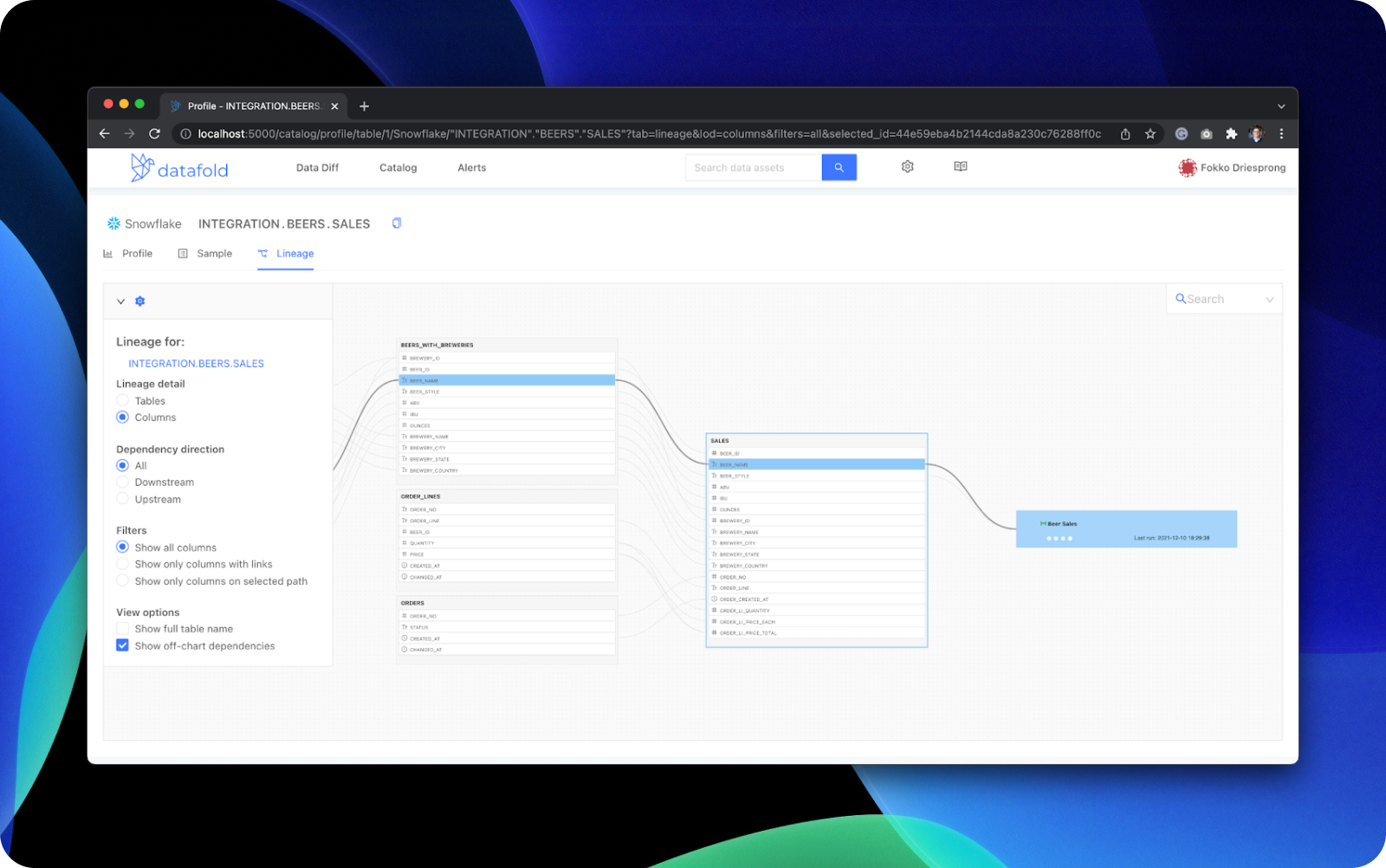 With the new Jobs UI you can check what tasks are currently running in your Datafold account and easily troubleshoot various integrations such as Diff in CI as well as audit the use of Datafold. 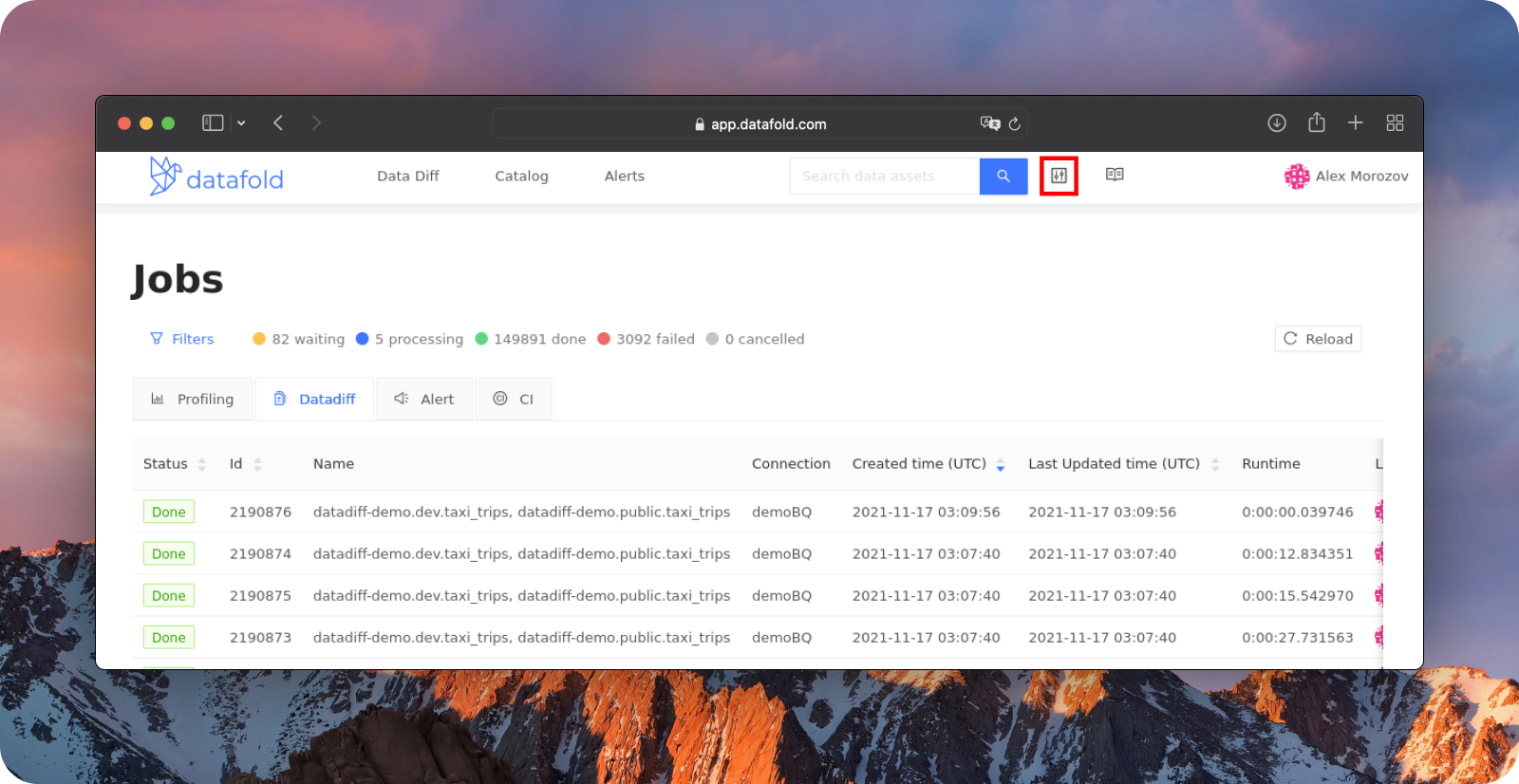 Fixed displaying of Alert schedules when an hourly interval is selected.

For Data Diff to work in CI, it needs to know the primary key for each table it analyzes. Datafold provides a few options for defining primary keys in the dbt model:

To help you ensure that Data Diff can look up or infer primary keys for all tables in your dbt project, we added check-primary-keys command to the Datafold CLI.

Now you can quickly jump to any column in the Diff Values tab which can be helpful when diffing especially wide tables:

Run Data Diffs only with the Datafold label

There are situations where you don't want to run Data Diff in your CI unconditionally. Running it on every change, is the recommended way, to make sure that you don't let any unindented changes slip through. Similar to running the unit and integration tests in the CI, you don't want to disable the tests, since it will likely break a test without you knowing it.

When you're integrating Data Diff, you sometimes want to try it on a select number of changes. This is why we added a new option to the CI integration: 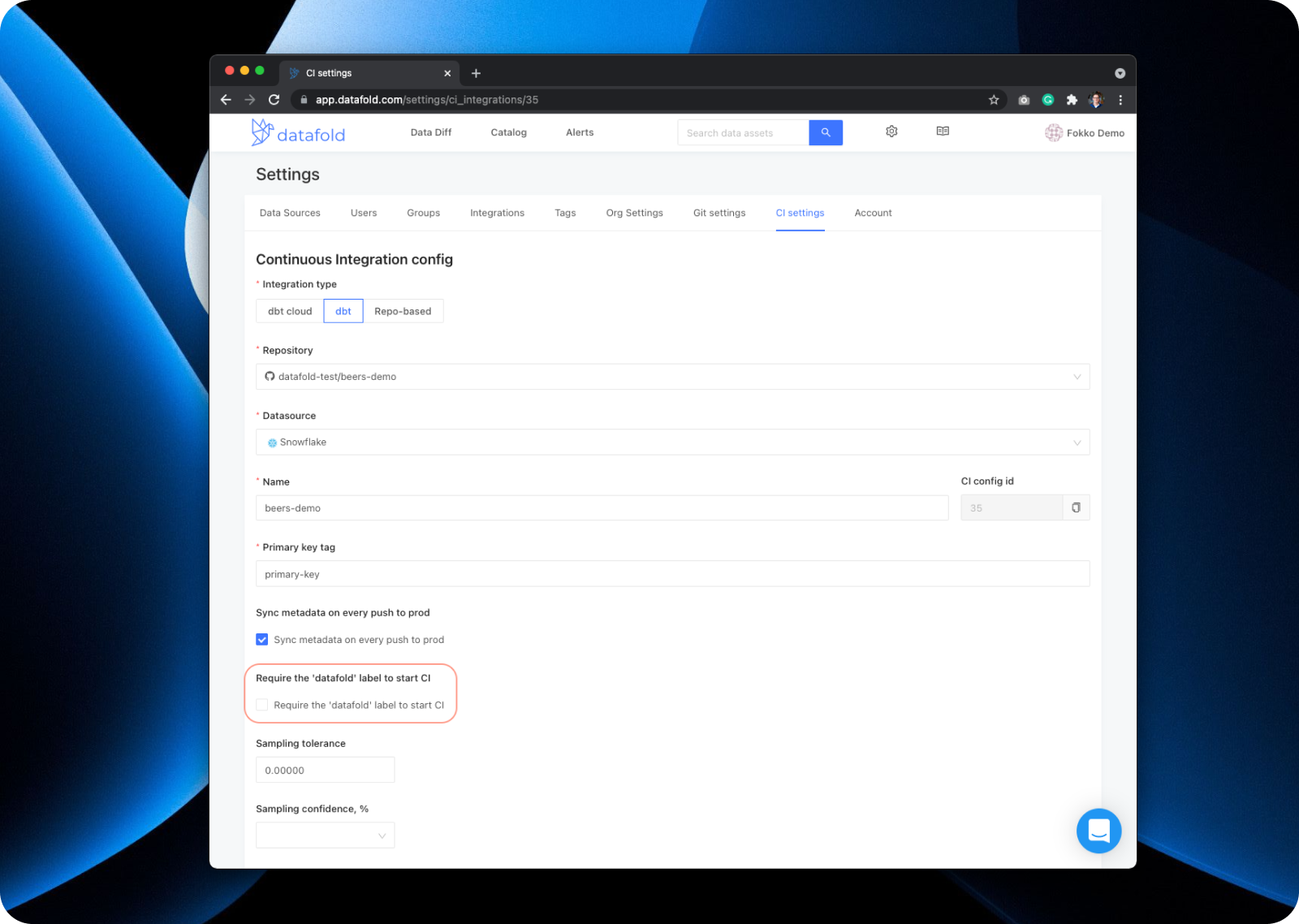 Checking this box won't start a Data Diff right away when opening up a new Pull Request. After setting the Datafold label in Github/Gitlab, it will start the actually diff. 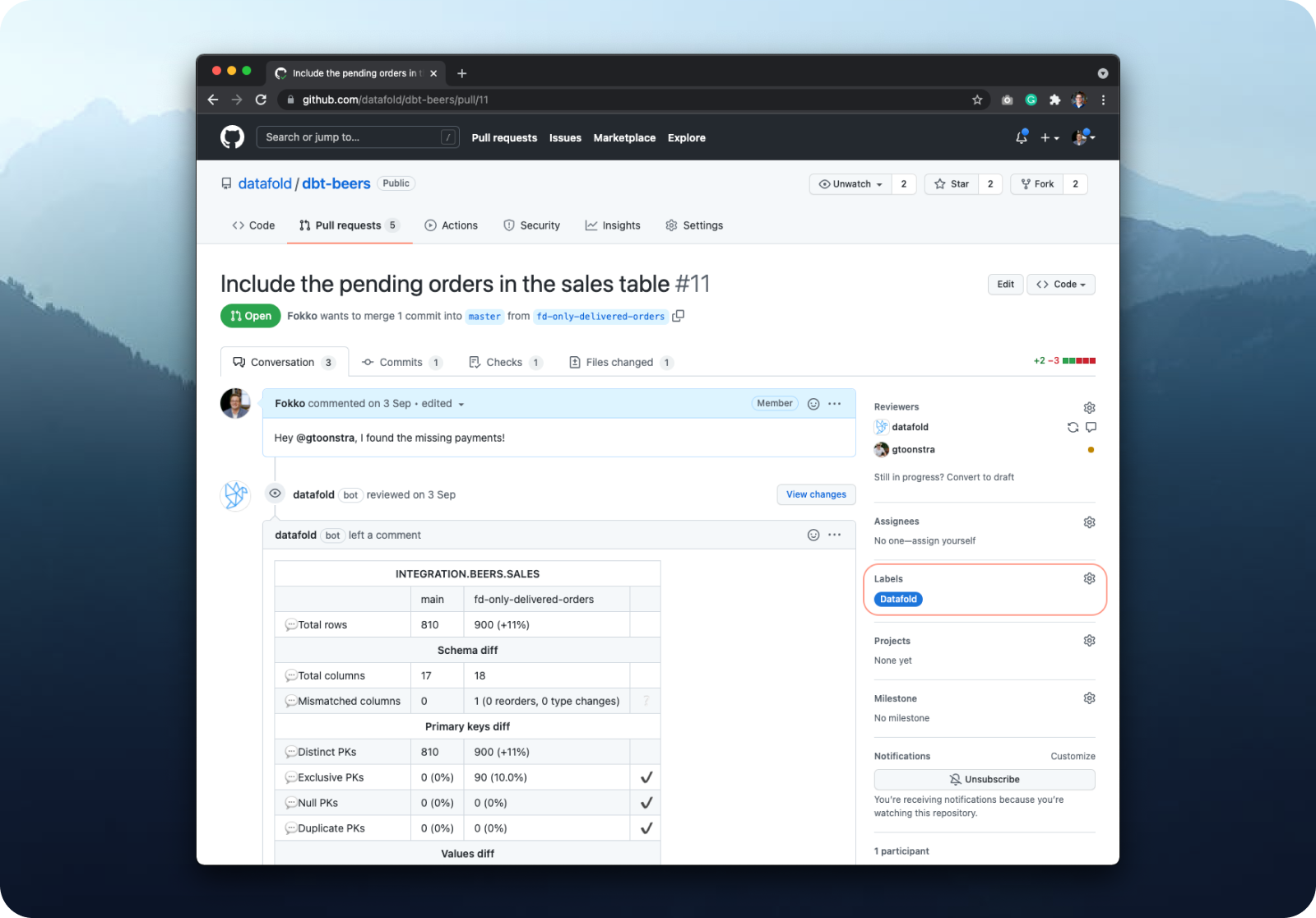 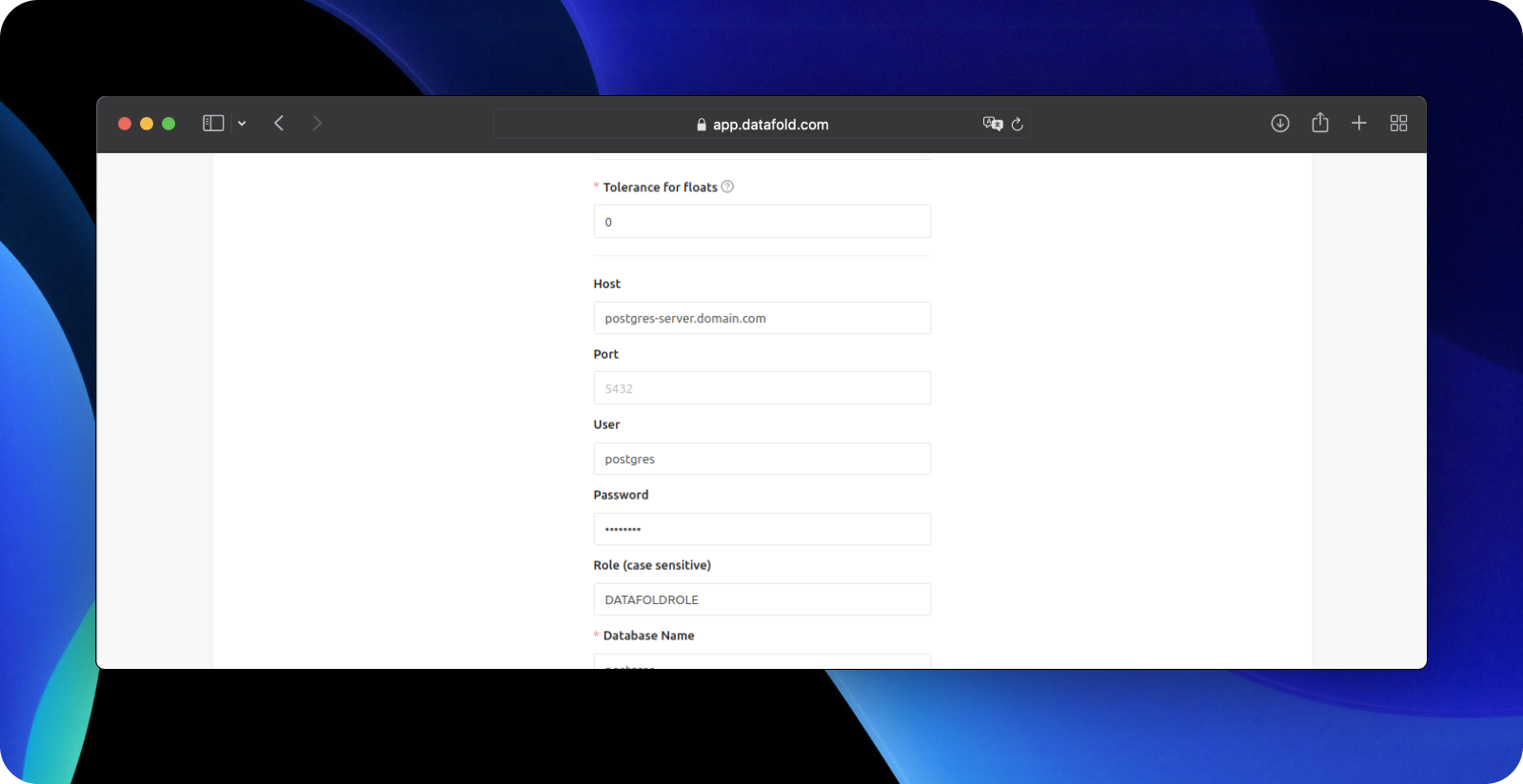 For Aurora PostgreSQL data sources, we've also added an optional keep-alive setting that will allow you to turn on keep-alives for very long running queries. This is a parameter specified in seconds. Leave the option empty to disable keep alives.

To provide some more context to the options available in the data sources configuration screen, we have added tooltips. We hope this makes the configuration settings a little bit easier without changing back-and-forth between our documentation pages.

Our new GraphQL API is also becoming more mature. We applied a performance optimization for loading database and schema info. Previously it was required to load the tables first, but those can now be queried separately.

We have also added a couple of bug fixes:

Improved messaging on the GitHub integration

This update is based on customer feedback to have more meaningful feedback in the Data Diff process. We updated more information to the GitHub statuses when running the Data Diff:

For example, we include the git hash of the job that it is waiting for. After the job starts, it will show a link to the actual job:

This can be either the job building the pull-request or the main branch. This helps to understand what’s going on when running the Data Diff, and what it is waiting for.

The datafold-sdk is used for synchronizing the information after a dbt run into Datafold. Datafold will extract the table and column information and it is used for Data Diff when running on a pull request.

It is a common practice to clean up the tables after a run on a pull request has ran. But Datafold might need these tables to run the Data Diff. Therefore we have the Datafold upload-and-wait command. Instead of starting the Data Diff asynchronously, it will block for the Data Diff to complete. This makes sure that you don’t drop all the tables before the Data Diff has finished.

Datafold works seamlessly with dbt. With the latest version of Datafold, we support synchronizing the metadata from dbt’s sources and seeds. Sources are tables that are external to dbt, often tables in the landing zone. When declaring a source, you can annotate it with additional information, which is also synchronized to Datafold. 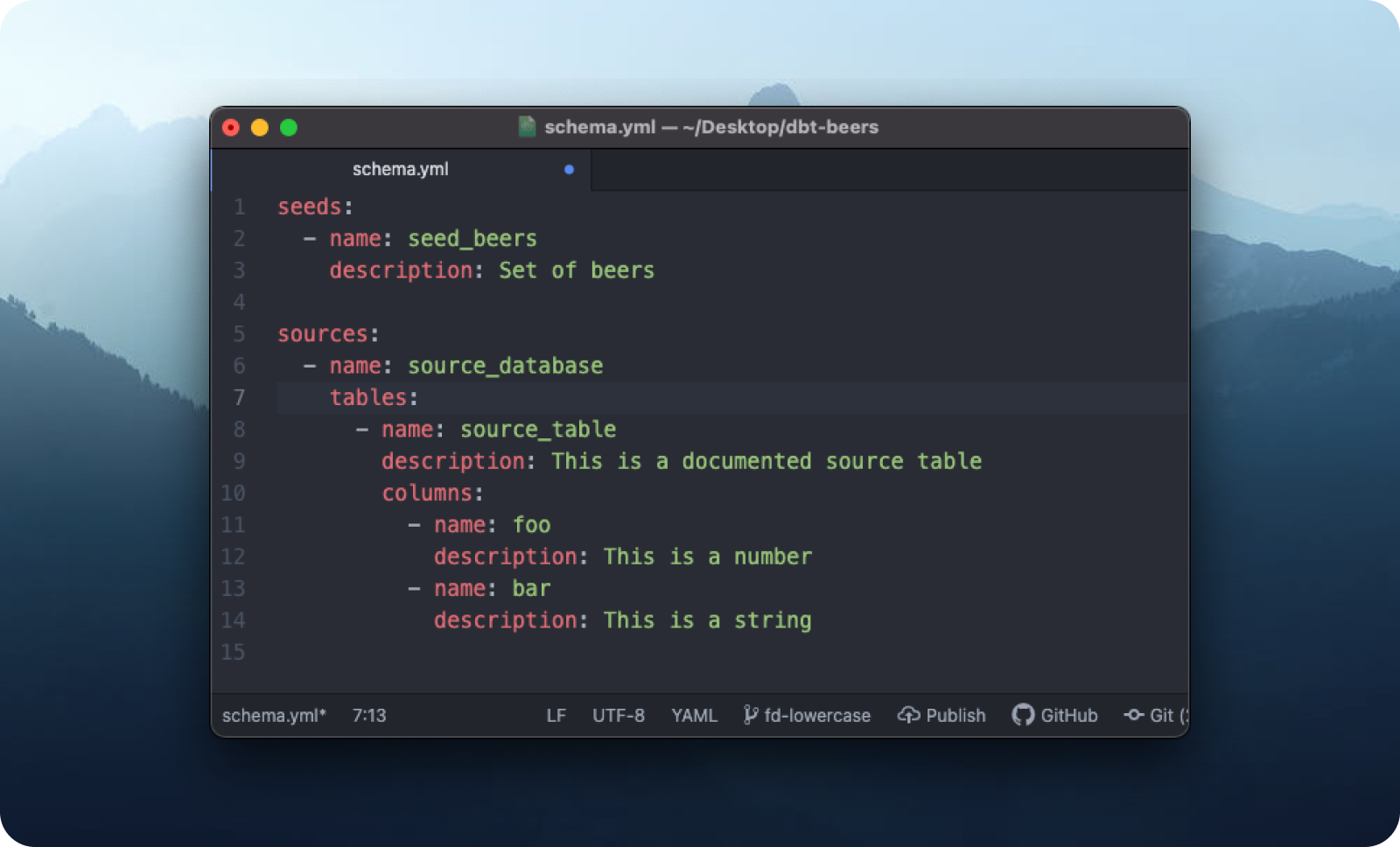 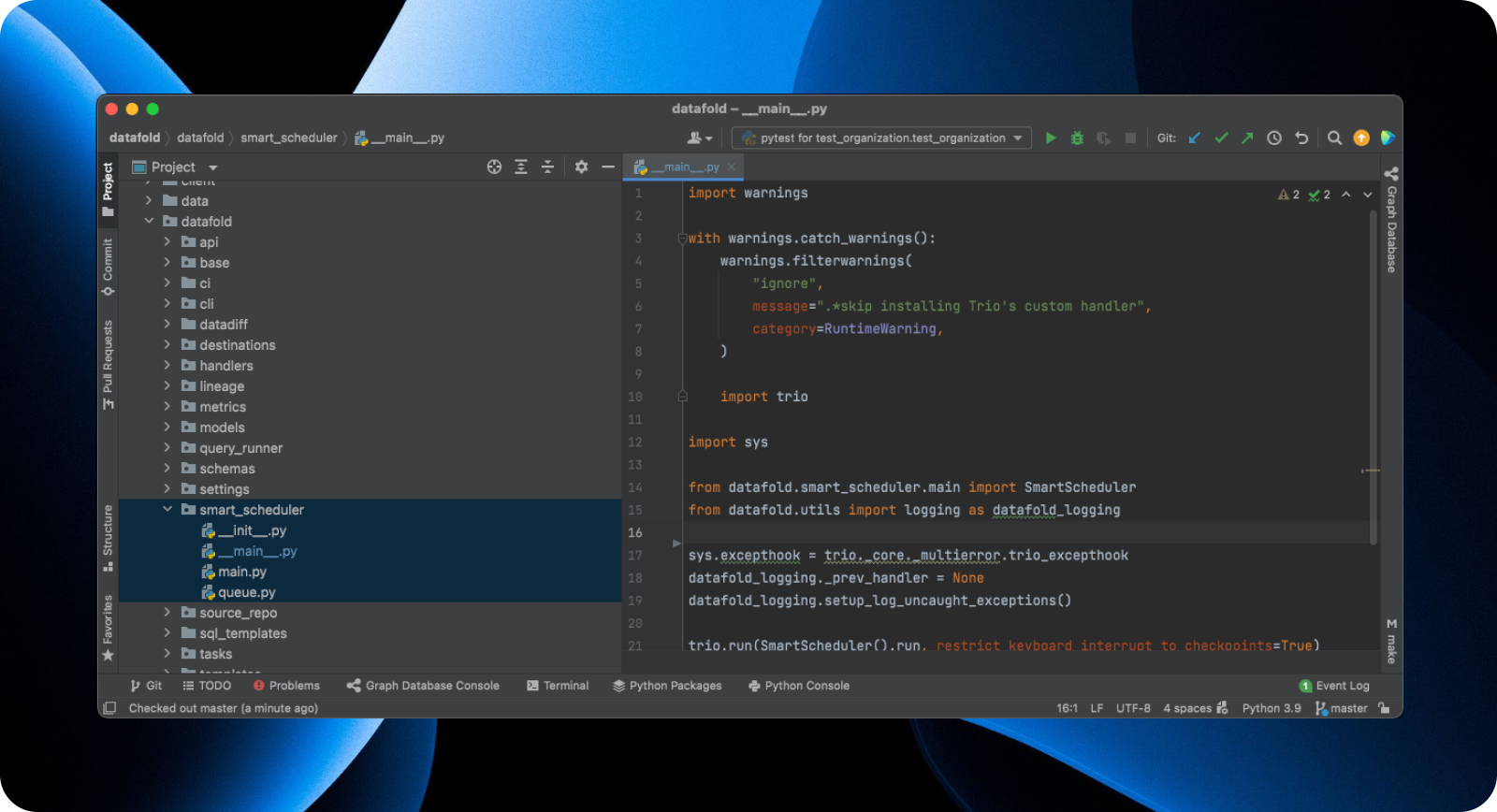 We’ve implemented a new scheduler that we call the smart scheduler. Most users know that certain tasks can impose some load on the data warehouse. This allows us to have more control on the tasks that are running, resulting in a more predictable load. We built this together with our Redshift users because Redshift doesn’t handle concurrency very well. This provides a way to run the tasks in a gentle way.

It can happen that a query against the data warehouse results in an error. Maybe the database is offline? Maybe the table is huge and it takes a very long time? Or in the example, below we’re having a divide by zero at runtime. We now have more informative errors when the profiling job fails.

Lineage edges are now hoverable showing source and target nodes, which are highlighted on edge click.

GraphQL is an increasingly popular method for retrieving information. It gives the developer more control over the desired entities and which specific fields they want to access. We now support a GraphQL API for our lineage information. Read more about it in this technical blog.
We’re continuously adding more information to the GraphQL API. For the latest state, please refer to the documentation.

For running Datafold, we use the primary key of the table to see what changed. One popular way of checking this constraint is using the unique_combination_of_columns function from dbt_utils. With Datafold we now detect the use of these tests, and infer the primary key from it. This allows you to easily get started with Data Diff. Next to this, you can always set the primary key explicitly if desired.

Time travel is a useful feature of some modern data warehouses that allows querying table at a particular point in time. Using that feature in combination with Data Diff can be very helpful to detect data drift in a table by diffing it against its older version. When testing changes in prod vs. dev environments, time travel can also help align both environments on the state of source data. 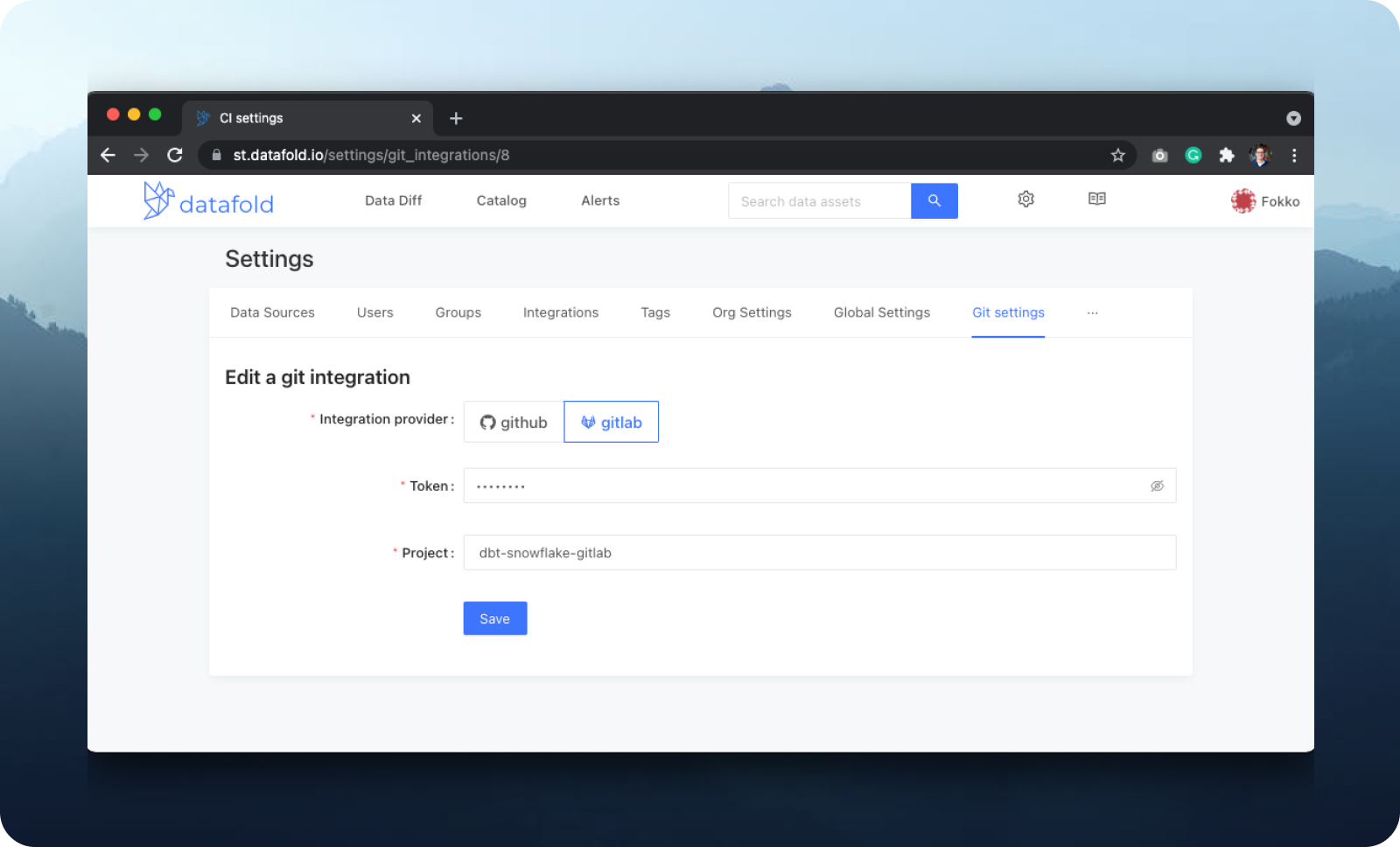 Now it’s possible to automate full impact analysis of every PR to ETL code in Gitlab repositories.See how a change in the code will impact the data produced in the current and downstream tables.

More information on how to set it up can be found in the docs.

While the true power of ML-aided alerts comes from monitoring metrics in time, sometimes it may be helpful to check a single value against a set threshold. 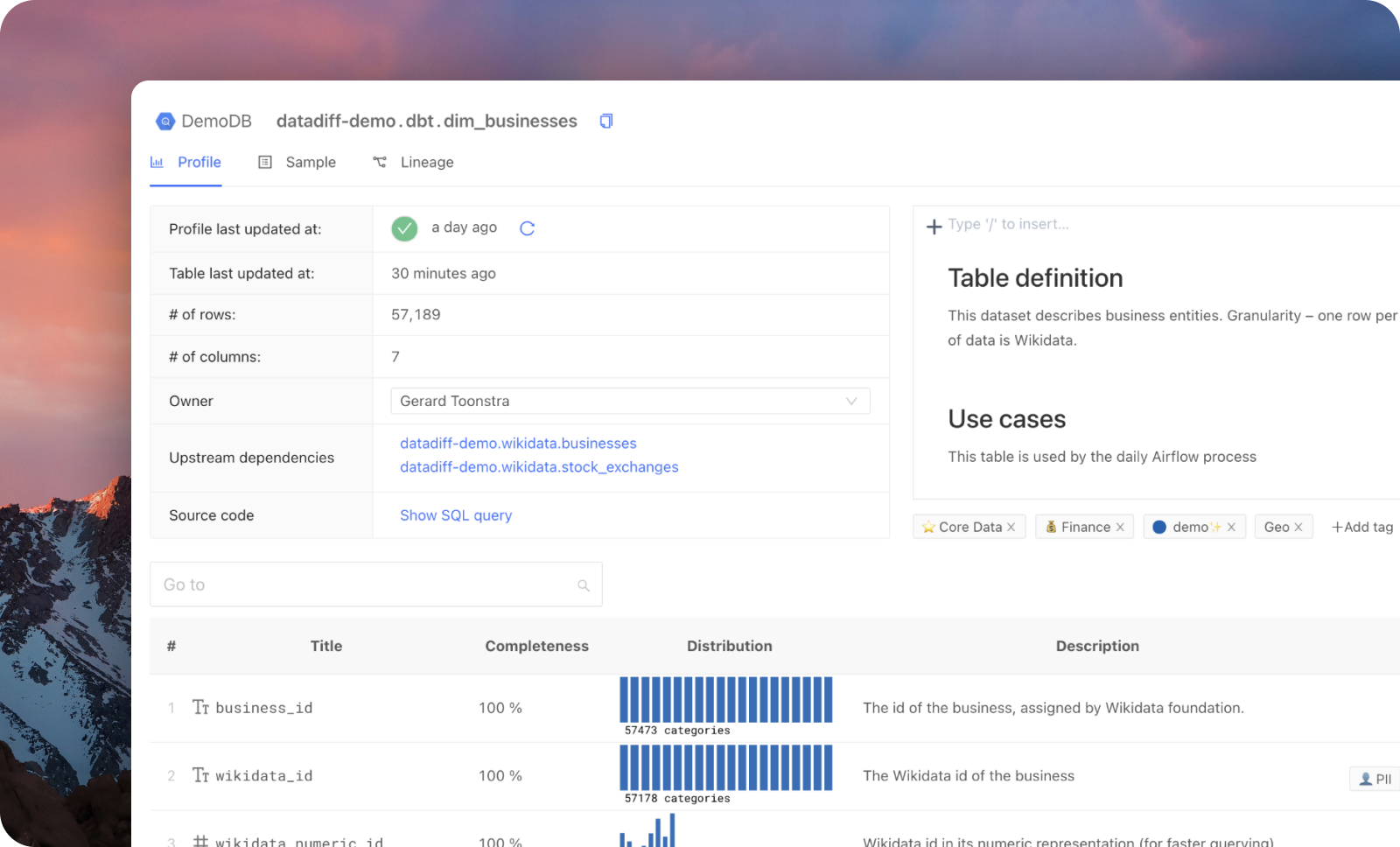 Catalog learns about your data from everywhere 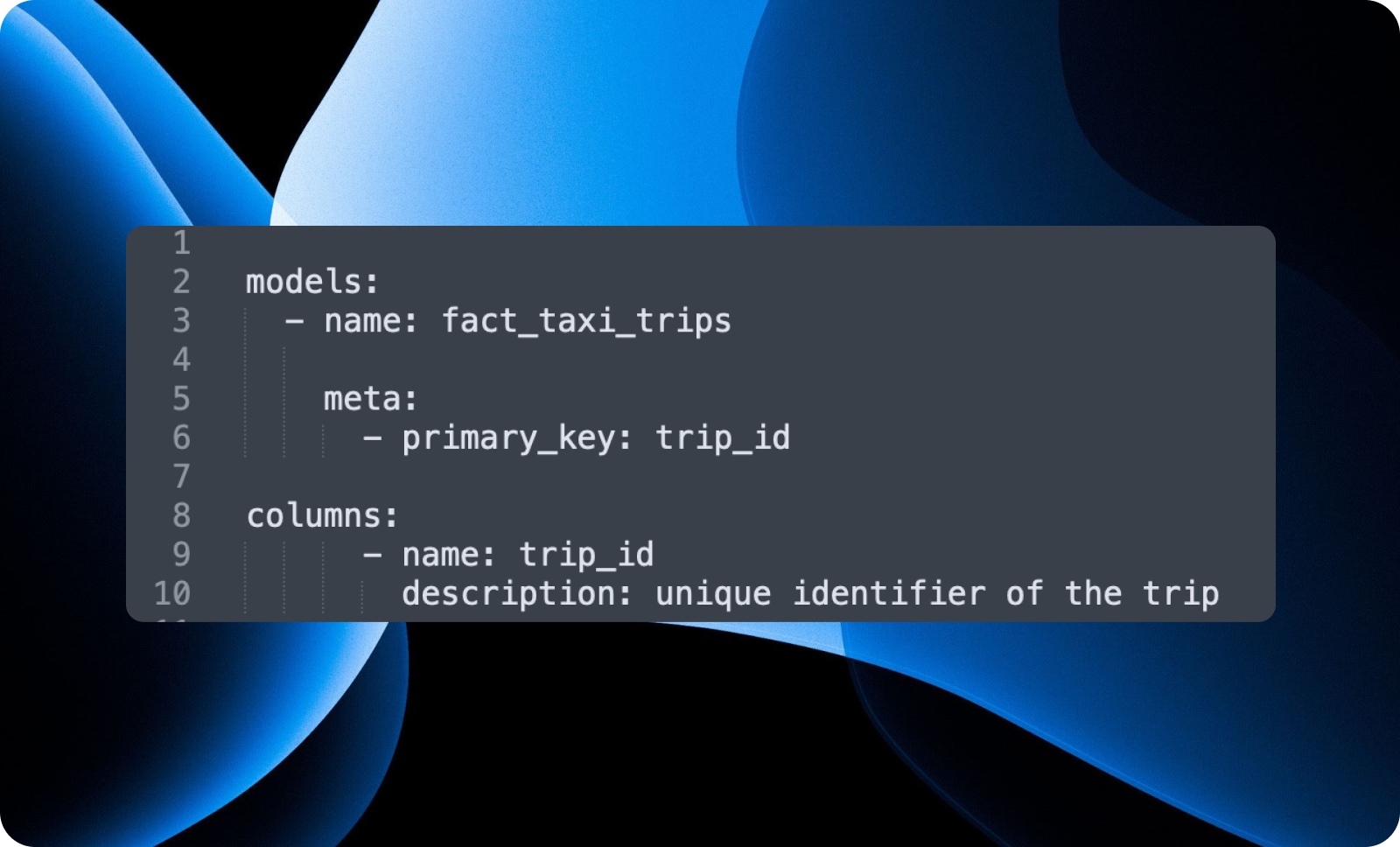 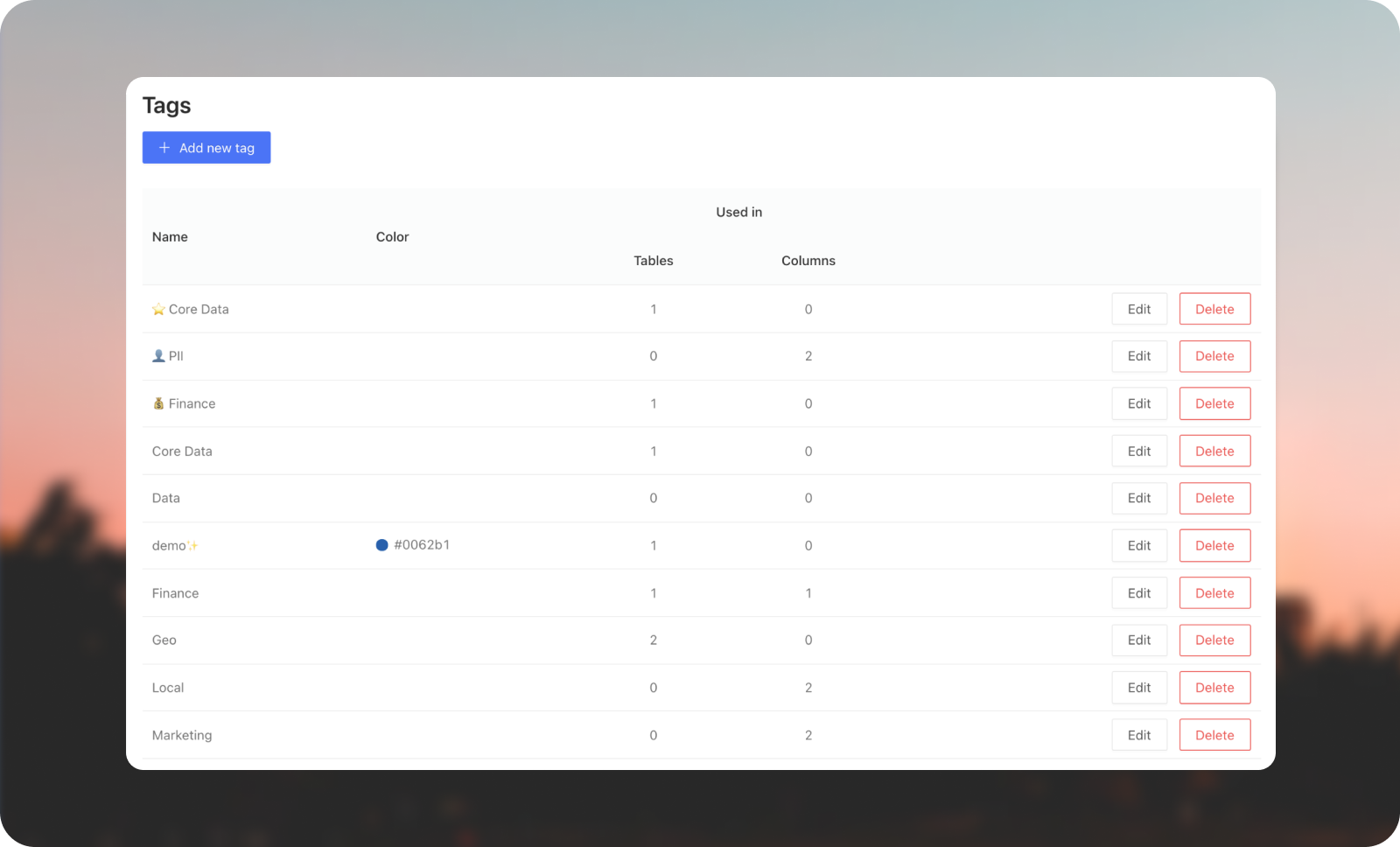 Since tags became a really popular way to document tables, columns, and alerts in Catalog, many of you have requested a better way to manage them including the ability to customize their color to enhance readability. Now all tags can be created, edited and deleted in the Settings menu. 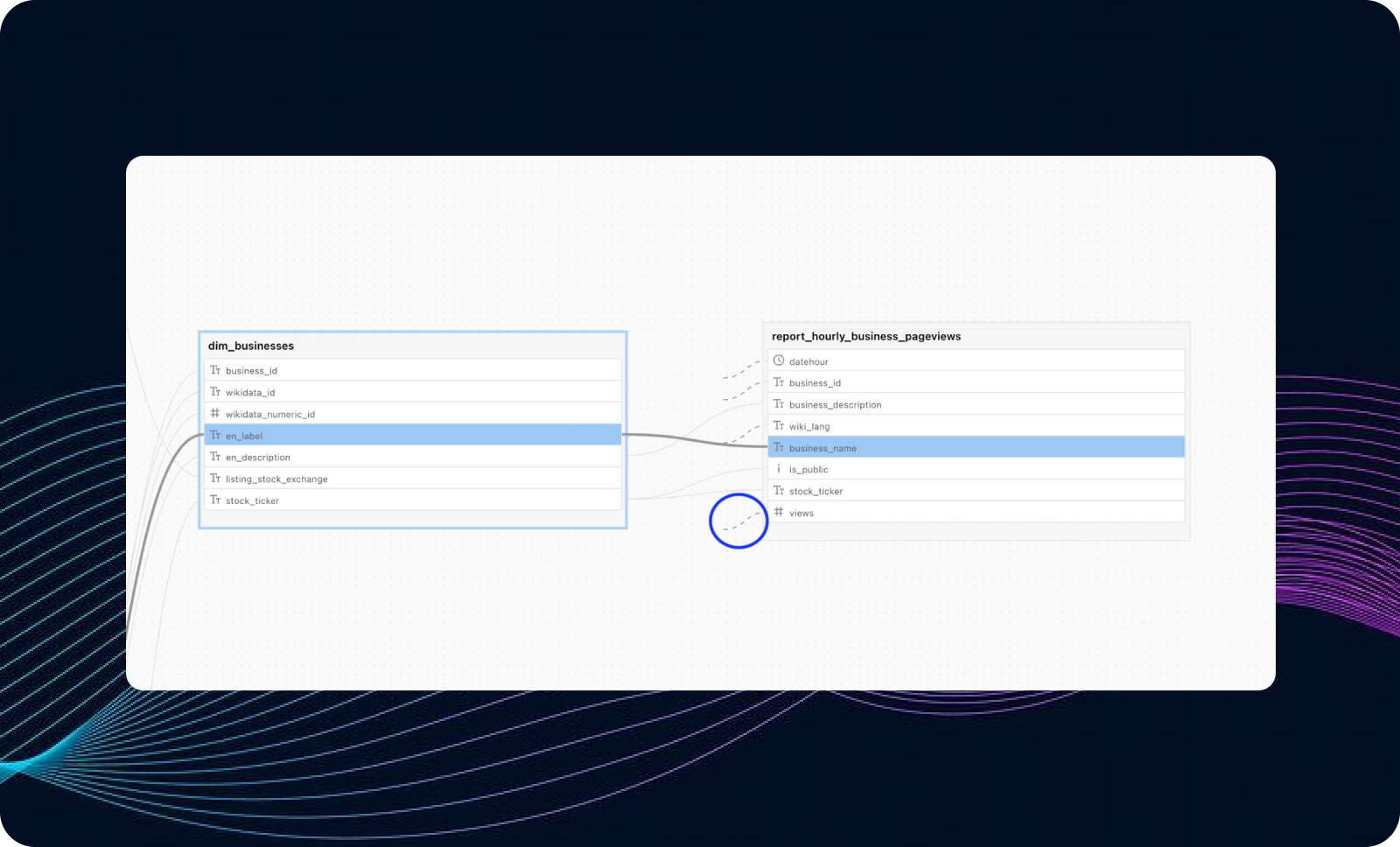 Lineage graphs can often get very complex and messy with all dependencies plotted at once. That’s why by default, Datafold shows a slice of the full lineage graph centered on a particular table (“dim_businesses” in the image below). That means that the graph will show tables and columns directly upstream or downstream of the chosen table. At the same time, downstream tables (“report_hourly_bysiness_pageviews”) may have other upstream dependencies unrelated to the table on which the lineage view is centered. To avoid bloat, those dependencies are shown as dashed lines. Clicking on them will center the lineage graph on the chosen table. 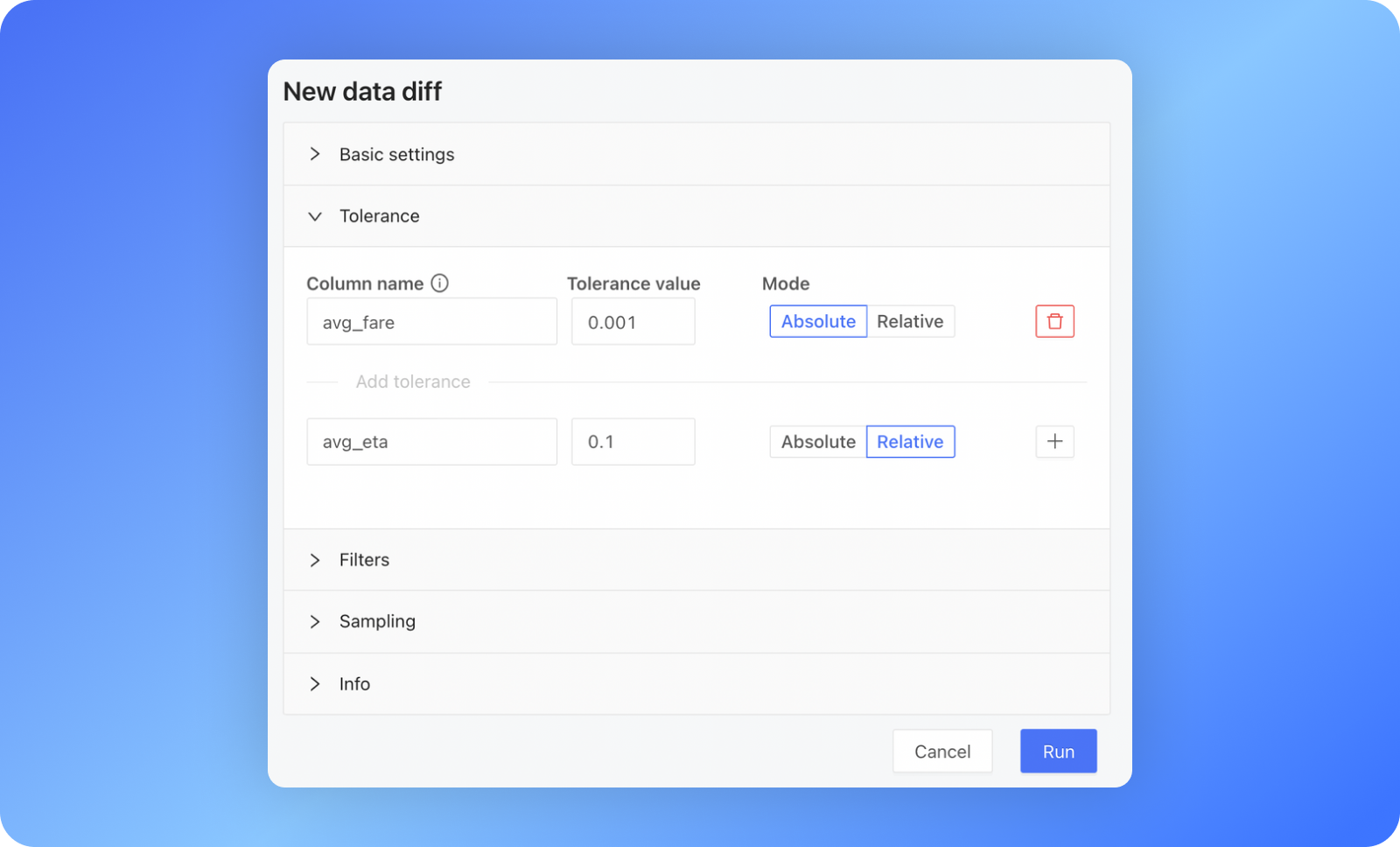 Sometimes it may be helpful to compare columns with a threshold instead of strict equality. For instance, when a database column is a FLOAT computed as a division of aggregates (e.g. COUNT(*) / SUM(someFloatCol)), the results of the computation are not strictly deterministic, resulting in differences that are irrelevant from the business standpoint but would be flagged by diff if strict equality is used: 1.1200033 vs. 1.1200058. Diff tolerance allows you to specify an absolute or relative threshold below which differences in values would be considered equal.

When entering tags, you can rely on autocomplete to avoid creating semantically similar tags:

On-prem deployments now require an install password at first install used to check the state of the CI process. 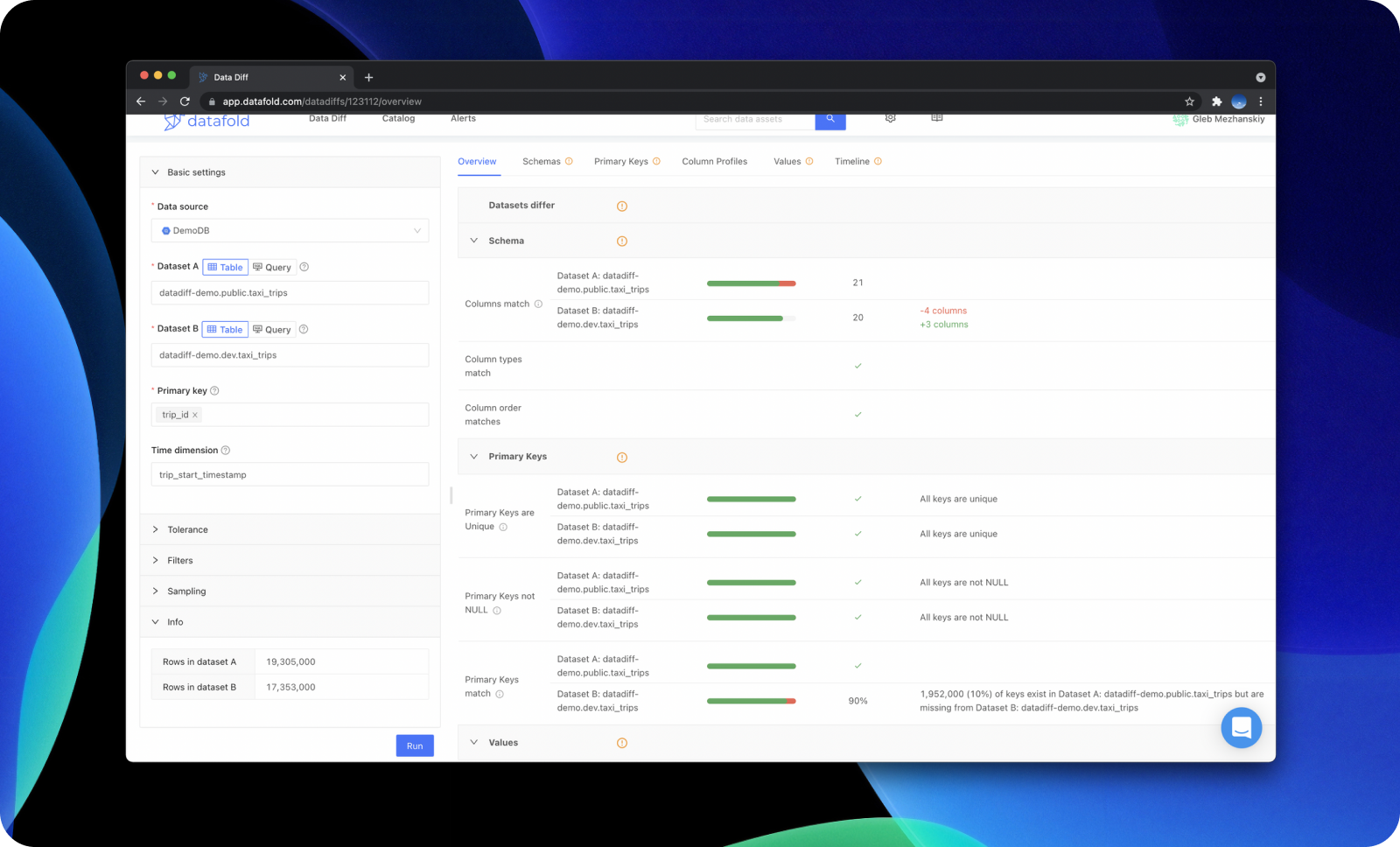 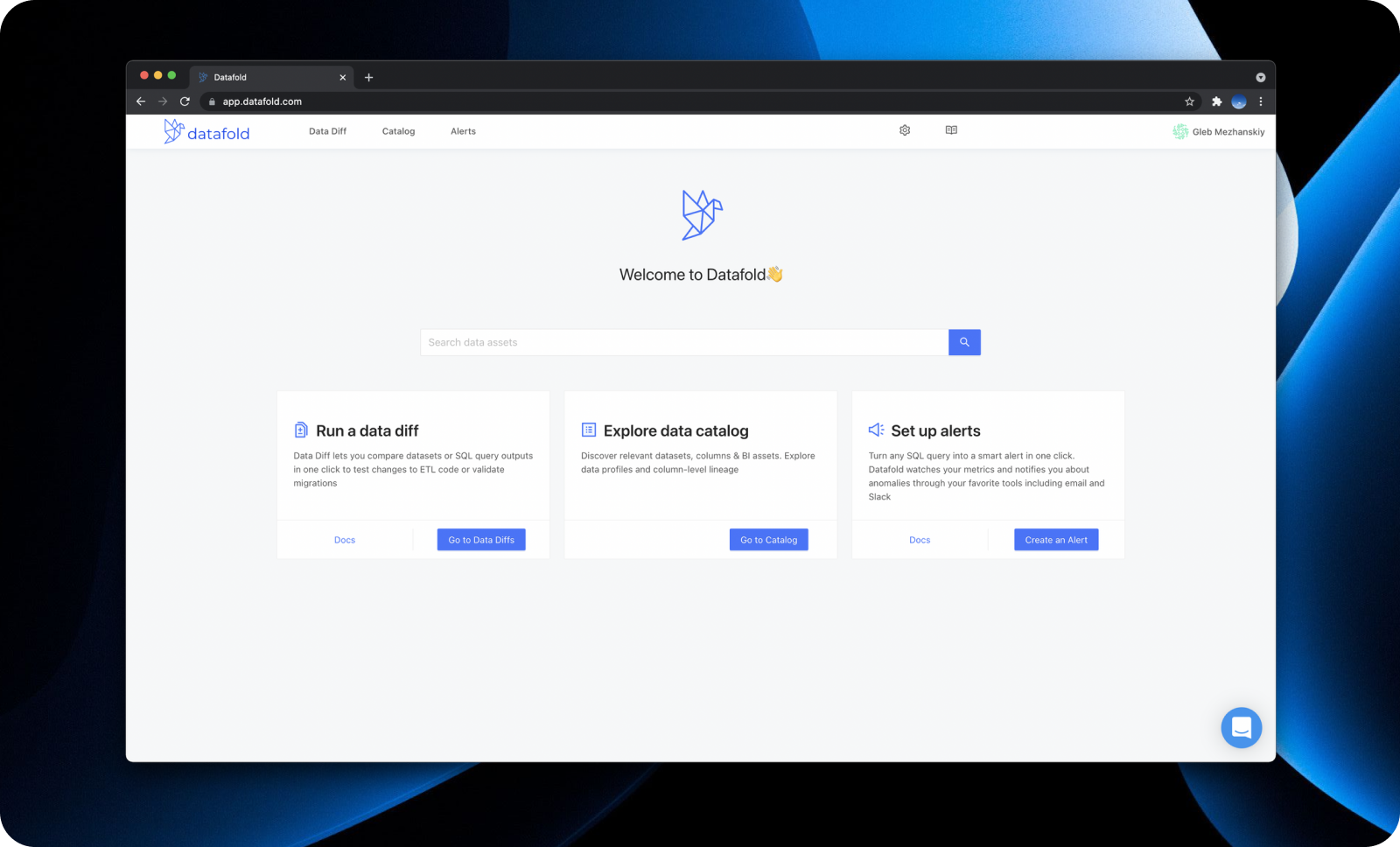 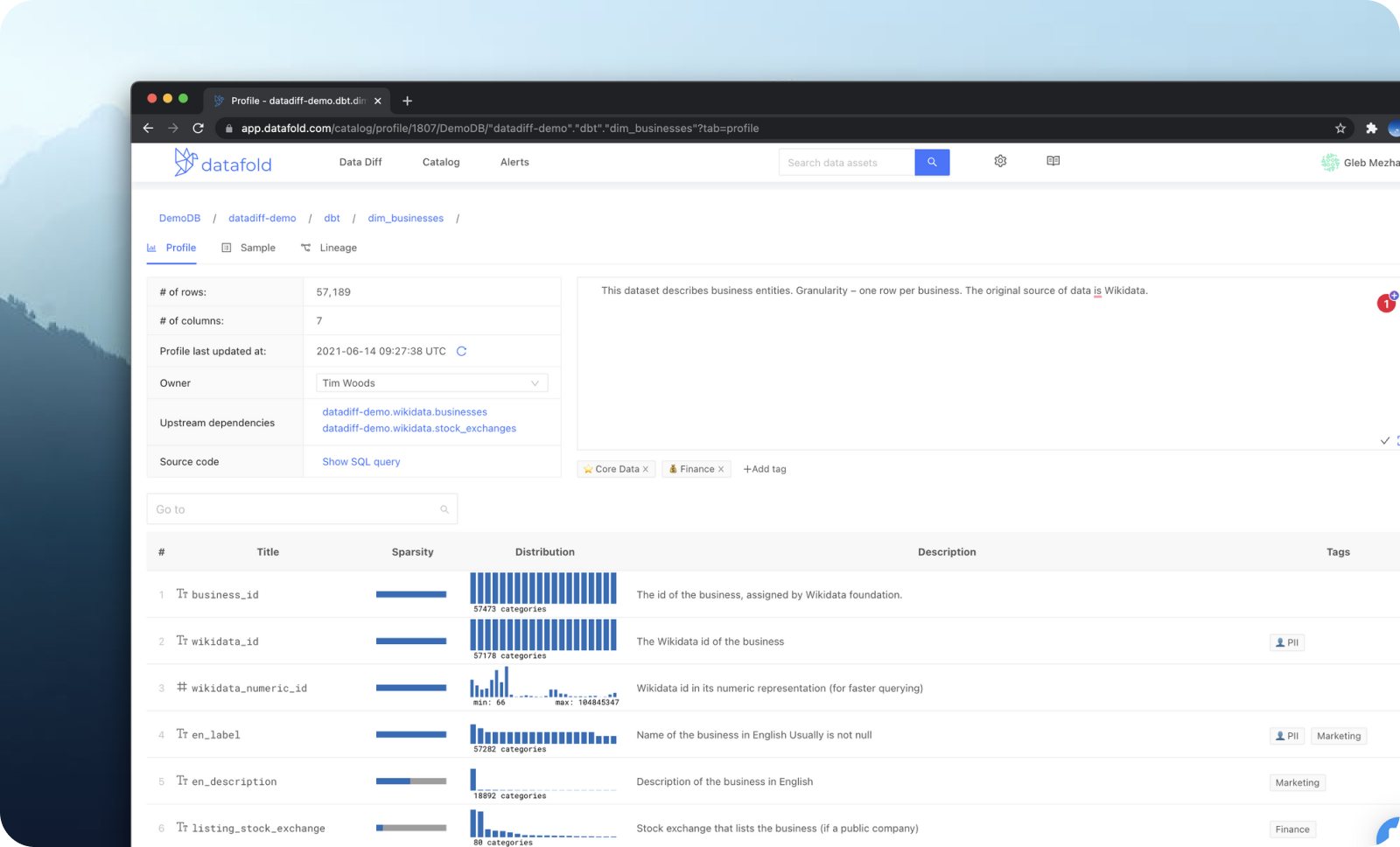 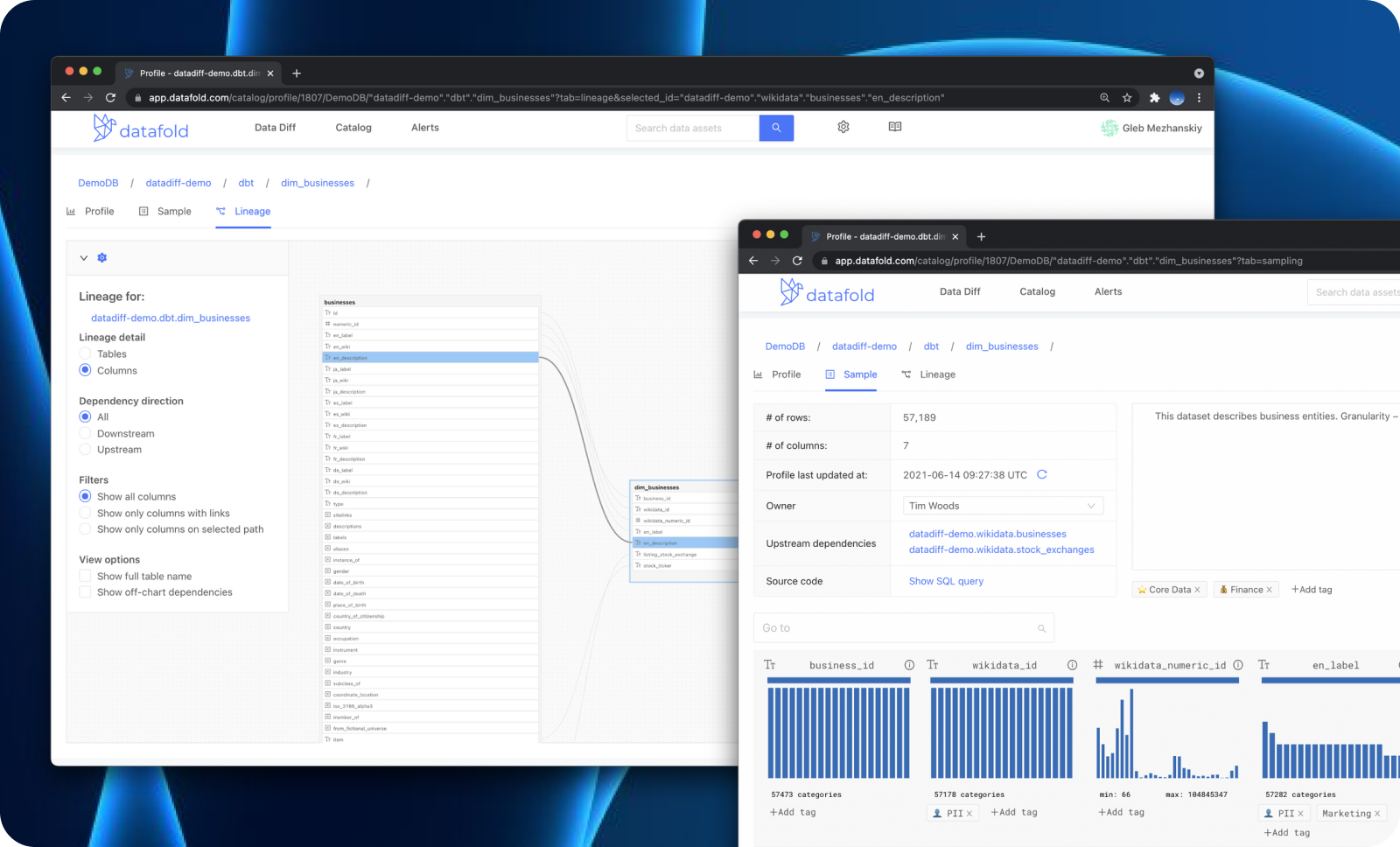 Instead of querying the entire SQL query history, Datafold now looks at only new queries and updates the lineage graph incrementally. Currently works for Snowflake and Bigquery.