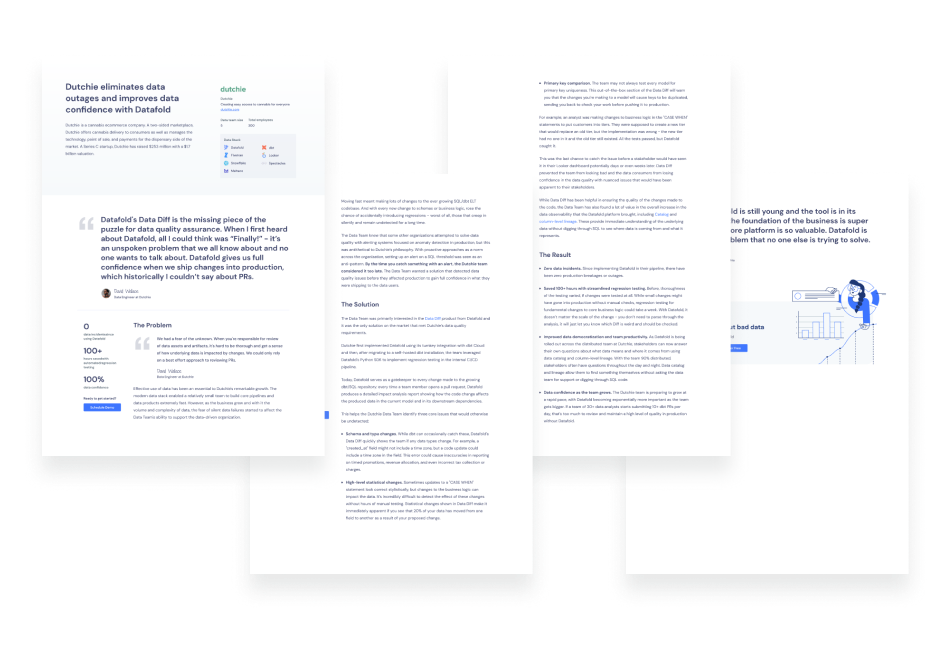 Dutchie is a cannabis ecommerce company. A two-sided marketplace, Dutchie offers cannabis delivery to consumers as well as manages the technology, point of sale, and payments for the dispensary side of the market. A Series C startup, Dutchie has raised $253 million with a $1.7 billion valuation.

Datafold's Data Diff is the missing piece of the puzzle for data quality assurance. When I first heard about Datafold, all I could think was “Finally!” - it’s an unspoken problem that we all know about and no one wants to talk about. Datafold gives us full confidence when we ship changes into production, which historically I couldn’t say about PRs.

We had a fear of the unknown. When you're responsible for review of data assets and artifacts, it's hard to be thorough and get a sense of how underlying data is impacted by changes. We could only rely on a best effort approach to reviewing PRs.

Effective use of data has been an essential to Dutchie's remarkable growth. The modern data stack enabled a relatively small team to build core pipelines and data products extremely fast. However, as the business grew and with it the volume and complexity of data, the fear of silent data failures started to affect the Data Team's ability to support the data-driven organization.

Moving fast meant making lots of changes to the ever growing SQL/dbt ELT codebase. And with every new change to schemas or business logic, rose the chance of accidentally introducing regressions – worst of all, those that creep in silently and remain undetected for a long time.

The Data Team knew that some other organizations attempted to solve data quality with alerting systems focused on anomaly detection in production, but this was antithetical to Dutchie’s philosophy. With proactive approaches as a norm across the organization, setting up an alert on a SQL threshold was seen as an anti-pattern. By the time you catch something with an alert, the Dutchie team considered it too late. The Data Team wanted a solution that detected data quality issues before they affected production to gain full confidence in what they were shipping to the data users.

The Data Team was primarily interested in the Data Diff product from Datafold and it was the only solution on the market that met Dutchie’s data quality requirements.

Dutchie first implemented Datafold using its turnkey integration with dbt Cloud and then, after migrating to a self-hosted dbt installation, the team leveraged Datafold's Python SDK to implement regression testing in the internal CI/CD pipeline.

Today, Datafold serves as a gatekeeper to every change made to the growing dbt/SQL repository: every time a team member opens a pull request, Datafold produces a detailed impact analysis report showing how the code change affects the produced data in the current model and in its downstream dependencies.

This helps the Dutchie Data Team identify three core issues that would otherwise be undetected:

For example, an analyst was making changes to business logic in the case when statements to put customers into tiers. They were supposed to create a new tier that would replace an old tier, but the implementation was wrong - the new tier had no one in it and the old tier still existed. All the tests passed, but Datafold caught it.

This was the last chance to catch the issue before a stakeholder would have seen it in their Looker dashboard potentially days or even weeks later. Data Diff prevented the team from looking bad and the data consumers from losing confidence in the data quality with nuanced issues that would have been apparent to their stakeholders.

While Data Diff has been helpful in ensuring the quality of the changes made to the code, the Data Team has also found a lot of value in the overall increase in the data observability that the Datafold platform brought, including Catalog and column-level lineage. These provide immediate understanding of the underlying data without digging through SQL to see where data is coming from and what it represents.

While Datafold is still young and the tool is in its early stage, the foundation of the business is super sound. The core platform is so valuable. Datafold is solving a problem that no one else is trying to solve.